TDC initiated the Barbados Tourist Attraction Audit Programme to assess several attractions around the island in terms of their accessibility, facilities and overall aesthetics with the view to improve upon these aspects where necessary. TDC subsequently sponsored improvements at five sites, creating a more comfortable, secure and enjoyable atmosphere for visitors, in an effort to enhance the overall holiday experience and the likelihood of generating higher levels of repeat business. At Andromeda Botanic Gardens, Welchman Hall Gully, St. John’s Church and Farley Hill National Park respectively, TDC sponsored the installation of much needed signage, benches, tables and garbage receptacles. Additionally, pathways at the two former sites were refurbished, while the two latter sites benefited from upgrades to the onsite washroom facilities.

Also completed under the programme was the Cherry Tree Hill Redevelopment Project. Cherry Tree Hill is situated on a cliff overlooking Barbados’ East Coast and has long been a popular stop for visitors wishing to take in the breathtaking views of the Scotland District and the coast. Over the years, however, the surrounding terrain at the lookout point had been significantly eroded, resulting in cars and tour buses having to park along the narrow road when stopping to take in the view. This practice often created congestion in the area making it difficult for traffic to navigate the road safely. Additionally, the once picturesque mahogany grove, planted in the mid to late 18th century along the roadside leading to the hill, had become overgrown with bush and several invasive tree species.

TDC sought to enhance the surrounding area by constructing dual lay-bys along the roadside to allow temporary parking for visitors taking in the view and to allow traffic to flow unimpeded. Further, the eroded terrain at the lookout point was refilled with soil and landscaped with grass, plants and boulders to prevent soil erosion; while foliage not indigenous to the area was cleared to preserve the island’s oldest mahogany grove.

Lay-bys built on both sides of the roadway for parking at Cherry Tree Hill.

TDC also sponsored the production and installation of more than 175 places of interest signs throughout the island as a part of the Barbados National Road Signage Programme. TDC also opened its ‘Special Projects’ facility to accept contributions from non-members in order to broaden private sector support of the initiative in an effort to effectively address the critical need for improved road signage across the island.

Two of the “places of interest” signs sponsored by TDC under the Barbados National Road Signage Programme.

TDC co-sponsored the production of a 52-minute, high quality HD Special about Barbados for worldwide television distribution. The Barbados Style World Wide Television Special is the most definitive and high quality production ever made on Barbados. The Special encourages viewers to visit Barbados by promoting the island’s tourism product—facilities, culture, sports, music and nightlife. It also seeks to attract direct inward investment in real estate and international business on the island.

As an extension of the project and to further promote Barbados around the world, the TV Special has been reproduced as a Barbados Style DVD, which is currently available for purchase in Barbados at Cave Shepherd stores throughout the island and at other leading retail outlets at a recommended retail price of US $17.50.

Heritage tourism remains an untapped niche for Barbados even though much of the information and artifacts that highlight the island’s rich history have been well preserved over the years. TDC therefore supports projects that seek to revitalize Barbados’ heritage product in an effort to provide a platform from which tourism stakeholders can better exploit the available opportunities in this niche market. Funding support has been provided to several initiatives in an effort to further develop the Garrison Historic Area as a sustainable heritage tourism site. In recent years, TDC has sponsored the restoration of the Main Guard Clock Tower, as well as the development of a National Armouries Museum at St. Ann’s Fort. TDC has also assisted the Barbados Museum in their redevelopment efforts by sponsoring the refurbishment of the onsite Gift Shop, which has become the new main entrance and exit of the Museum, with a greatly expanded product line displayed within related mini-exhibits. 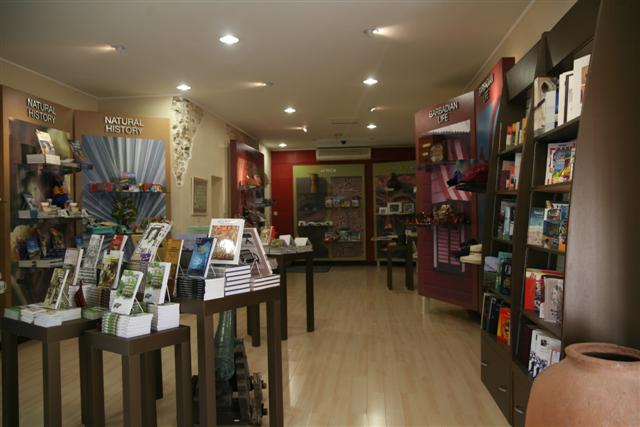 With the view to preserve Barbados’ eco-system for the enjoyment of current and future generations of locals and visitors alike, TDC partnered with the Future Centre Trust (FCT) in support of the following initiatives: –

• The Future Trees Project – TDC sponsored the supply, planting and maintenance of various species of trees to reforest and beautify a section of the ABC highway.

•Hastings Marine Education Mural – TDC sponsored the design and production of a tile mural which was installed on a retaining wall along the south coast boardwalk to beautify the area and educate the public about the local marine environment, with particular reference to the turtle population native to the area and near-shore coral reefs.

• Clean Up Barbados Campaign 2010 – TDC provided materials for use by volunteer crews to clean various roadside areas island wide, as well as provided support for the production and installation of interpretive signage at appropriate locations cleaned during the campaign. 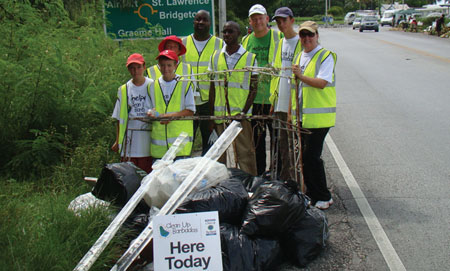 Volunteers in the Clean Up Barbados Campaign 2010

TDC also supports initiatives that seek to preserve and revitalize Barbados’ marine environment as an integral part of the island’s tourism product offering. One such project is the West Coast Beach and Reef Restoration Project—an important initiative which sought to address the continued erosion being experienced on a section of beach along this coast. Funding assistance was provided for a coastal engineering study to determine feasible solutions to redress the rapid erosion taking place; and to assist with the physical model testing of the initial and final solutions recommended for implementation by the study. Several groynes were placed at specific locations in the area and the interim results were highly successful as the condition of the affected beaches has greatly improved.

TDC has also assisted the Barbados Marine Trust (BMT) with the implementation of a number of initiatives, namely the installation of interpretive signage along Carlisle Bay beach to promote environmental best practices to users of the bay; and the Reef Ball Gardens project. Reef Balls are concrete “igloos” with several holes, and are used to create artificial reefs, which provide unique dive sites while also helping to maintain the health of our beaches. 500 reef balls were manufactured and distributed at Oistins Bay and Carlisle Bay to spur the development of artificial reefs at these two sites.

We use cookies to ensure that we give you the best experience on our website. If you continue to use this site we will assume that you are happy with it.Ok